The advent of antibiotics in the early 20th century transformed therapy saving and continuing to save millions of lives globally and in the US.  The flip side of this revolutionary treatment has been the development of antibiotic-resistant pathogens (superbugs) that have caused havoc worldwide and most notably in hospital settings. Examples of such superbugs include multidrug-resistant tuberculosis and methicillin-resistant Staphylococcus aureus. 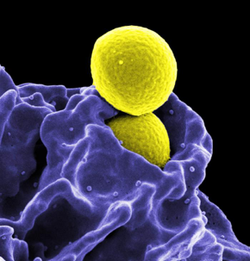 This digitally-colorized scanning electron micrograph (SEM) depicts two yellow-colored, spherical methicillin-resistant Staphylococcus aureus (MRSA) bacteria that were in the process of being phagocytized by a blue-colored human white blood cell (WBC) known specifically as a neutrophil. Source : CDC / Produced by the National Institute of Allergy
The discovery of antibiotics in the early 20th century transformed human medicine.  Antibiotics now save millions of lives each year in the US and around the world. There are many resistant bacterial, viral, parasitic and fungal organisms. The rise of antibiotic-resistant bacterial strains has become a growing problem especially with diseases like tuberculosis, as well as MRSA (methicillin-resistant Staphylococcus aureus), and Infectious Diseases (NIAID), CRE  (carbapenem-resistant Enterobacteriaceae) and other bacteria which spread easily in hospitals (Healthcare-associated infections) These organisms, which are resistant to common antibiotics, are often referred to as superbugs and represent a serious threat to public health. Antibiotic-resistant bacteria cause an estimated two million illnesses and 23,000 deaths each year in the US. As more strains of bacteria become resistant to the available antibiotics, our treatment choices will become increasingly limited and, in some cases, nonexistent. 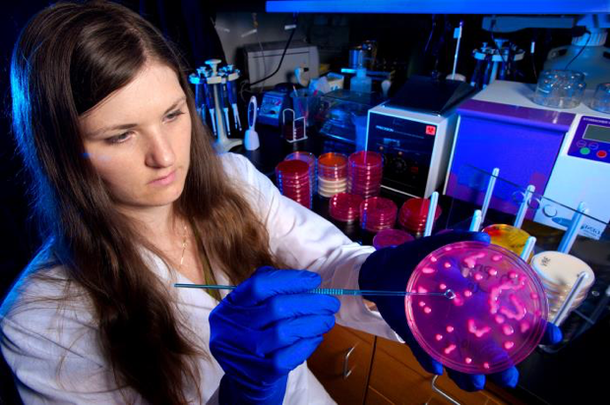 Source: CDC
This 2014 image depicts Centers for Disease Control (CDC) laboratorian Alicia Shams, as she was showing viewers a Petri dish culture plate that demonstrated growth of Klebsiella pneumoniae on a growth medium of MacConkey agar. Using an inoculating loop held in her right hand, Ms. Shams was pointing out the bacterial colonies which grew atop the MacConkey medium contained in the Petri dish she held in her left hand. 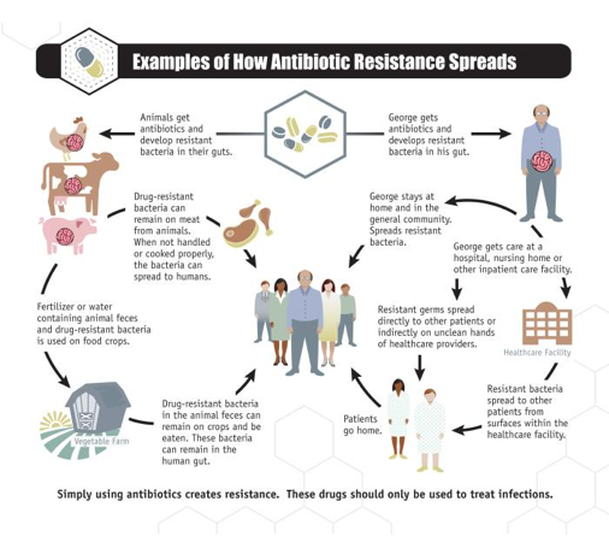 Source: CDC
This infographic illustrates in very simple terms, “Examples of How Antibiotic Resistance Spreads”. The take-away message here, is that “simply using antibiotics creates resistance, and that these drugs should only be used to treat infections”.