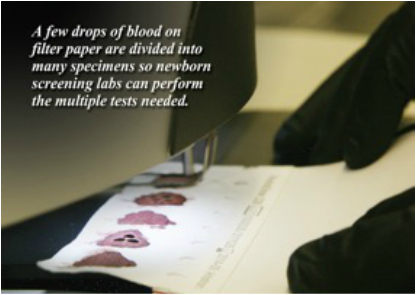 The Newborn Screening Story - Source: APHL
Screening of newborns for certain life threatening genetic deficiencies is another important facet of public health where public health laboratory scientists play a critical role by using a combination of laboratory procedures. This remains the largest and most successful public health promotion and disease prevention system in the country and perhaps the fastest, safest way to help protect babies. A few drops of blood from the baby’s
​heel is placed on a special piece of paper and tested by public health laboratory scientists using various biochemical and analytical procedures. Some examples of conditions screened for include cystic fibrosis, congenital hypothyroidism and sickle cell anemia.
​
Newborn screening, of around 4 million babies annually, allows those with these deficiencies to be identified and treated before they get sick, preventing serious illness or death. In the US, PHL scientists help save the lives of  more than 12,000 babies every year!